Artifacts of a Life

Just a few accessories that belonged to the real Betsy Bonaparte, with a portrait showing her wearing the tiara. She was 37 or 38 and living in Europe when the painting was made. 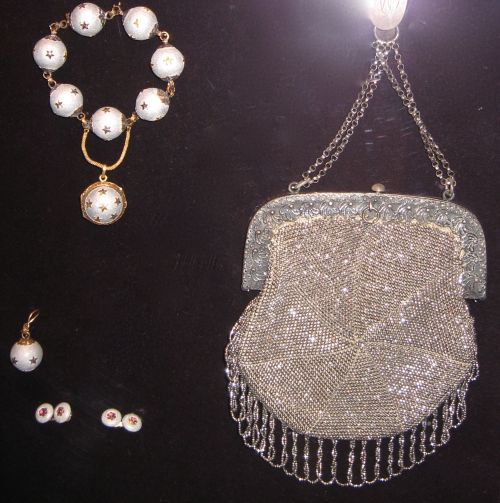 Everytime I see the photograph of this jewelry and small handbag, I think how fashionable they would have been in the 1960s!

Painting in the collection of the Maryland Historical Society, photograph by Michael Chatlien, 2011

Two years ago when I was visiting Baltimore for research, my husband and I toured the Homewood House Museum. Homewood was the mansion of Charles Carroll, Jr., son of Charles Carroll of Carrollton (the only Catholic to sign the Declaration of Independence). Today, Homewood is beautifully restored, decorated, and furnished to authentically represent how it originally looked. It’s located on the campus of Johns Hopkins University, and I strongly recommend visiting it if you’re ever in Baltimore.

Elizabeth Patterson Bonaparte almost certainly attended parties at Homewood in its heyday. Not only were the Pattersons and Carrolls both leading Maryland families, they were also intimately connected. In 1806, Betsy’s older brother Robert married Charles Carroll, Jr.’s niece, Marianne. So Homewood was a must-see for me. The day we visited, I told the woman who was going to be our guide that I was there to do research for a historical novel, but I did not name my subject. I was scrupulous about keeping that information private until I finished my manuscript.

As we toured the mansion, our docent led us into a room they have furnished as Mrs. Carroll’s dressing room. Almost directly in front of where I was standing was what looked to be a small, low mahogany table with slender neoclassical legs. Set within an arch-shaped opening in the “table” was a recessed silver basin. (You can see it in the third image on this page.) The docent announced in a somewhat amused voice that this piece of furniture was a bidet that had once belonged to Betsy Bonaparte. The docent didn’t elaborate—and because I was keeping my special interest in Betsy a secret—I didn’t press her for information. I must admit that I had a very difficult time keeping a straight face.

You see, up until that moment, I hadn’t really thought about Betsy in terms of her bodily functions, so unexpectedly encountering her bidet was disconcerting. It turned out, however, to be enormously helpful to me as a novelist, because it allowed me to think of her in an earthier way. She became more of a flesh-and-blood woman to me than just a hazy historical figure.

After we returned home, I did some Internet research and found an article originally published in the Baltimore Sun (Rath, Molly, “You Never Know What Will Turn Up Among the Collectibles at the Maryland Historical Society,” November 20, 1994). According to that article the silver basin in the bidet was inscribed with the name of Napoleon’s own silversmith. I can only assume that Jerome gave it to Betsy after they married—or bought it for their home.

The article also mentioned that Betsy carried a porcelain bourdaloue with her when she traveled. A bourdaloue is basically a fancy, French porta potty shaped something like a gravy boat—a handy thing to have for those long 19th-century carriage rides. I find it difficult to imagine Betsy hiking up her skirts and taking a tinkle in a public coach, but maybe she used it in the shrubbery during stops along the way. And she and Jerome did travel extensively in their own privately owned coach and six, so theoretically, she could have used it there.

Both the bidet and the bourdaloue were left to the Maryland Historical Society (MdHS) by Betsy’s grandson. At first, the curators at MdHS didn’t realize what the bourdaloue was. Thinking it was an extra large sauce dish, they put it on display as part of a table setting—until a porcelain expert enlightened them about its true function.

Since Betsy was known for her sharp sense of humor, I feel certain she would have been amused.

A Sample Bourdelou (not Betsy’s), Photograph by Austin Towers, via Wikimedia Commons

As a young girl, Betsy Patterson loved to read, and she enjoyed showing off her quick mind. One book she savored was the Maxims of the Duke de La Rochefoucauld—a collection of more than 500 sayings. La Rochefoucauld was a French aristocrat who had lived during the 1600s. His maxims were insightful, cynical, pragmatic, and sometimes scornful. It seems an odd choice of literature for a young girl, yet something in it spoke to Betsy. By the time she was ten, she had diligently memorized each saying. As I was writing the novel, I had fun having her recall maxims that were appropriate to what was happening in her life during various periods. To give you a sample of La Rochefoucauld’s outlook, some of the maxims I didn’t quote in the book are listed below:

We are never so happy or so unhappy as we suppose.

Great names degrade instead of elevating those who know not how to sustain them.

We may bestow advice, but we cannot inspire the conduct.

In a time when many children memorized psalms, this was the view of the world that shaped young Betsy’s consciousness. One of the many things that made this woman distinctive.

Today we return to the subject of clothing in the 1800s. In all the movies made of Jane Austen novels, we see young women attending balls wearing flimsy, lowcut, empire-waist dresses with long, elbow-length, white gloves.

When I was growing up in the 1960s, I always assumed those gloves were made of cloth the way my mother’s formal gloves were. Well, I was wrong. The gloves that Betsy Bonaparte would have worn to a ball (and she loved to go to parties) would have been made of white kid. I can’t imagine how hot it must have been to dance while wearing leather gloves covering nearly the entire arm.

Speaking of white kid, the Maryland Historical Society has a pair of white kid shoes that belonged to Betsy Bonaparte in her eighties. Even as a woman of mature years, she wanted to be fashionable and wore pumps with heels.

That brings me to a final oddity about 19th-century fashion. Did you know that in the first half of the century, there was no such thing as right and left shoes? Both shoes in a pair were shaped exactly the same. The next time you have difficulty breaking in a pair of shoes, just thank your lucky stars that you didn’t live in Betsy’s day!