Zion: Theocracy on the Prairie 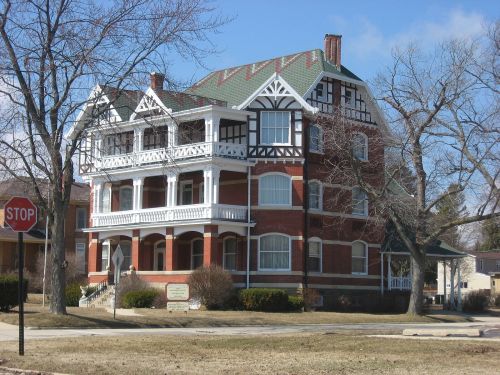 For the next few months, I will be writing about various utopian communities that I have been researching as background for my next historical novel. One of the many reasons for my interest in this topic is that I happen to live in a community that was founded as a religious utopia at the turn of the twentieth century. Zion, Illinois, was founded in 1901 by a faith healer named John Alexander Dowie.

Dowie was born in Edinburgh in 1847 to a religious family. His father worked as both a tailor and minister. In 1860, the family moved to Australia to better their economic situation. The young Dowie became interested in the spiritual aspects of healing at an early age. An experiment with his father’s pipe at the age of six made him feel so sick that he swore off the use of tobacco or alcohol. He developed digestive problems once they moved to Australia, a condition that he claimed to heal by praying and trusting in God.

When Dowie was 21, he returned to Scotland to enroll at Edinburgh University, where he studied theology and English. His father called him back to Australia before he obtained his degree, but once there, he was ordained as a minister in the Congregational Church, a denomination he served for nearly ten years. During this time, he published an anti-Catholic work called Rome’s Polluted Springs.

He became an independent minister once he began to preach divine healing, the belief that he could cure people through prayer and the laying on of hands. He was briefly involved with the Salvation Army and later got in trouble with the Melbourne, Australia, authorities for leading unauthorized processions. Fire destroyed his church under questionable circumstances, bringing the suspicion of arson down upon Dowie. He used the insurance money to pay off his debts and then moved to the United States.

He held services up and down the West Coast for a couple of years and then visited Chicago in 1890 for a convention on divine healing. A successful experience healing a woman with a fibroid tumor convinced him that God wanted him to stay there. During the Chicago World’s Fair of 1893, he rented a nearby property and held services of “Divine Healing.” Many scholars believe that the majority of the healings that took place were entirely staged, although there is some evidence that Dowie was able to relieve people of psychosomatic illnesses.

He continued his work in Chicago after the fair, gaining quite a few followers—and substantial opposition from those who thought he was a fraud. In 1896, he founded the Christian Catholic Church in Zion. (At this point, Zion was a reference to the mountain in Israel, not the later community in Illinois.)

Because of the continuing controversies about his work, Dowie secretly bought 6,000 acres of land in far northern Illinois (45 miles north of Chicago) on the shore of Lake Michigan. On that land, he founded one of the only completely planned communities in the world. The streets were laid on a grid with a circular drive surrounding the church at the center of the town. All north-south streets except two were given Biblical names. (The two non-Biblical names were chosen to honor his native Scotland.) East-west streets were numbered, starting with 1st Street on the Wisconsin-Illinois border and going south. A great deal of land was reserved for parks, a feature that continues to distinguish the city today.

The government of Zion was a theocracy, controlled by Dowie’s church, which prohibited consuming alcohol, tobacco, and pork, or practicing modern medicine. Dowie owned all the land in town and offered settlers 1,100-year leases.

The town, supposedly built as a community where believers could lead a perfect Christian life, turned out to be a giant economic fraud. Dowie’s followers were required to deposit their money in Zion Bank, which was not a legitimate financial institution but was wholly under Dowie’s control. He also sold worthless stocks in various Zion businesses. The town was continually in financial trouble, and in 1905 when Dowie traveled to Jamica for health reasons, he was deposed. The town came under the leadership of Wilbur Voliva, Dowie’s lieutenant. An investigation discovered that somewhere between two and three million dollars were missing.

Gradually, the church’s hold on the town diminished. Other churches were founded in Zion, as were new businesses. It remained a dry community for nearly a century, but in 2000, the city council passed an ordinance allowing liquor to be sold within the city limits.

Dowie’s fame, however, will live on as long as people read great literature. James Joyce was so intrigued by the man that he made him a character in his novel Ulysses.